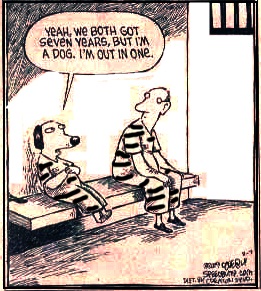 The famous comedian Woody Allen once said, “If you want to make God laugh, tell him your plans.” Well, that’s one way for sure! But if you think about it, there are two kinds of laughter.

The one we mostly know is the laughter of hearing a funny joke (like today’s cartoon) or having a good time with friends. In fact the Bible even says that this type of laughter is good for our body and soul (Proverbs 17:22) But even flipping this cartoon around a bit, there is the laughter AT someone or something for the failure of their ways, and this is what today’s scripture verse is saying to those that are contrary to God.

God, to put it bluntly, doesn’t look down well on evil people, ways or attitudes towards Him. Many that are hyper-critical of the “god” of the Bible are fond of pointing out how cruel, angry and even sadistic God is as shown in many Old Testament accounts as proof that such a “god” cannot be worthy of any kind of respect - let alone worship. However to understand the background of these stories of wrath it is vital to know WHY these events occurred.

In a very, VERY concise nutshell the people that God ordered killed were heinous groups of wicked people that were followers and worshippers of numerous false gods. Even more importantly they were haters and rebels against the God of Abraham, Isaac, and Jacob and sought to blaspheme God and destroy his people. Be that as it may, whoever or wherever people are that spit in the face of god (if he/she/it even exists…) have a day that is coming where instead of them laughing at “god”, GOD WILL BE LAUGHING AT THEM. The scripture makes this clear here in the Epistles:

“Do not deceive yourselves; no one makes a fool of God.
You will reap exactly what you plant.”
Galatians 6:7

My friends, this is perhaps one of the sternest message I have ever written on Your Daily Notes but it is the TRUTH. Of course you have the right and freedom to believe or think anything you want about the Bible, Christ, Sin, and God. To you, all this might be just a bunch of Nonsense, but consider this...and what if you are wrong?

God is not a cruel, sadistic God, but he is a God of Justice but even much more, God is the God of LOVE. He takes much more pleasure of laughing WITH you in LOVE then the horror of laughing AT you in JUDGEMENT.

Which way would you prefer to hear that laughter?